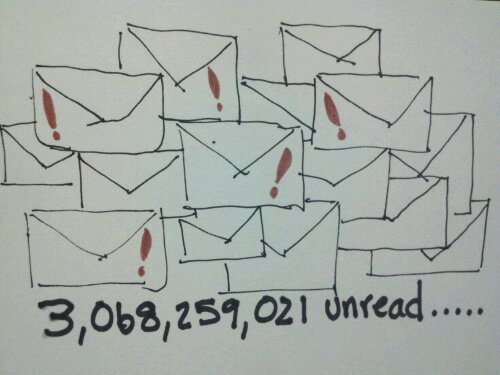 It started so innocently….first one, then a few more, that thrill that you were needed,  you were connected, something exciting  was going on in your inbox.  Then – drip, drip, drip – they just kept on coming.  Daytime, night, weekends, vacation – drip, drip, drip.  And what seemed good or useful kept piling on until the Pavlovian reaction is less teenager-in-love-thrill and more make-the-torture-stop.

There was a point at the three-quarters way mark of a huge project last year that I actually did have 2,277 unread emails in my inbox.  Not three billion, but close, pretty close.

The first time I sat down to send an email, I had an address and a vague idea of what email was, but I had nobody to send a message to except my friend sitting at the terminal next to me.  We spent about 10 minutes there then headed out for food, coffee, people, something real.  I feel like I’ve been through the cycle of not having a use for email to email becoming virtually useless.  The important stuff is buried in the flood of newsletters, cc’s, people trying to schedule meetings through conversation instead of calendar, and the general chaos of people punting in the general chaos  that has more in common with a multi-team global soccer game with no rules than with actual communication.

Wikipedia lists “information overload” as the third problem with email (higher than spam, lower than limited attachment size).  So, what do we do?

In Germany, some lucky dogs at VW have their email blocked during non-work hours.  I think that’s better in some ways than trying to train ourselves to ignore, unplug, and ditch the habit between certain hours – but it’s really ignoring the real problem.

Email has become, in my opinion, fairly worthless but we lack a coherent alternative.  Maybe.  I see people opting out altogether (just a few brave pioneers, mind you) but maybe that’s the wave of the future.  Want to talk?  Pick up the phone.