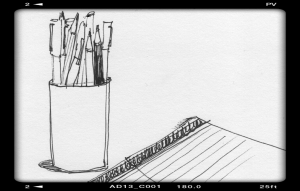 There are three killer hills at the end of my favorite bike ride and each one is bigger and steeper than the previous one. There comes a point, about two-thirds of the way up, when this phrase runs through my head.

It’s what gets me up the hills. I’ve talked to other people who ride bikes, and most cyclists have some version of this trick. It’s whatever gets you over the hard parts or up the last piece of the climb. Some people count strokes (“I’ll look up when I’ve pedaled 100 times”) some people go through the lyrics of a song before they look up. Whatever it is, it’s a way of marking the intervals in a difficult ascent.

I’m a strong proponent of having a life outside of work. It’s hard to do these days, when you carry your email around in your pocket and everyone’s sense of urgency is easy to absorb. Bicycling is a way for me to be out of touch for a while.

Interestingly, it’s often on a relatively flat stretch of road, while I’m watching the wind bend the grasses into rustling waves, smelling the cows and goats, and hearing the metallic ping of roof repairs on the nearby barn, that the answers to difficult questions appear most clearly.

I enjoy that feeling of calm, being out in the world, and working through things one wheel-turn at a time. With such emphasis on fast answers and immediate information, it’s easy to feel like success should also come in a click – like that good idea that pops out of nowhere. However, like a long bike ride,  we lay the groundwork for our larger ambitions and accomplishments in a million small ways. We have to put something into it.

It helps to have some focus. I have a friend at work who said to me in jest, “my hobby is hobbies.” I knew exactly what she meant. I have a million interests and a million-and-one things on my to-do list at any given moment. It’s been difficult for me to learn to pare back to a more manageable inventory of “projects.” Instead of swearing off all projects, I instituted a simple rule: finish what you started. Or call it over and move on. I was overwhelmed by the number of projects and things I wanted to get to, as well as the things I’d started and didn’t really want to finish. Throw something off your to-do list. It’s liberating. I was not going to be a knitter. It bored me. No matter how many cute projects other people did. And just because I could knit didn’t mean I had to knit. So I donated my yarn and moved on.

Ask yourself: What old ambitions are you holding on to, even though they’re out of date? What do you really want to focus on now?

It helps to develop some habits to support your focus. I used to rush in the mornings to pull together lunches. I was pretty good at talking to my kids over the counter while they ate breakfast, but they weren’t getting my full attention and sometimes I’d forget to bring my own lunch (or wouldn’t have anything to bring.) So I’d plan to just deal with it sometime during the day. Of course, my days weren’t exactly conducive to pulling together impromptu lunches. In a pretty basic switch-up, we now make lunches during or after we make dinner. Note that I didn’t say I, I said we. Which brings me to the third, and most life-changing step for me.

What could you do to open some time for the thing you want to focus on? Can you stop doing something? Designate a time most days for your focus?

Ask for help. My kids are fully capable of making a sandwich, I just wasn’t asking them to. Once it became part of our evening routine, we were enjoying breakfast together and rushing less in the morning. It took more discipline on my part, at first, to ask for help and make sure it became a routine. Once the habit was established, we had an easier time of it. Having that routine set helped me focus on a more personal goal. My favorite time of day to write is first thing in the morning. In order to make that happen, I had to go to bed earlier, set my clock, and ask for help. My husband brings the coffee and gets up with me. His support of the habits I wanted to maintain has been the best motivator when I feel less than energetic (and that’s basically me, pre-coffee.). Find someone who has your back, wants to help you put something into it, and you’ll have double the oomph.

What are you assuming someone won’t help you with? Have you asked? What do you assume you cannot do? Why?

Changing something in your life can feel an awful lot like those last few hills of the bike ride. They’re big, they’re steep, and you’re tired. But each stroke of the pedal brings us closer. When I’m on the hill, the only thing I have to focus on at that moment is putting one foot down, then the other. All those movements together bring us over the top.

What gets you over the hills?