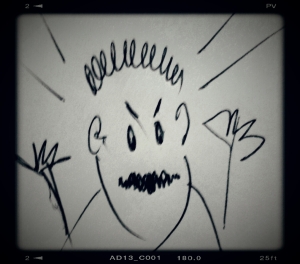 Conflict and anger travel hand-in-hand. Anger is probably one of the most difficult emotions to deal with, especially in a work setting where it’s not socially okay to blow-off, swear, yell, and act out. Yet, we’re human. We get angry. Learning to recognize and manage this emotion is key to moving through a lot of tough situations.

Sometimes, anger is easy to recognize. Our heart races, we can’t hear what anyone’s saying over the blood pounding in our ears. We tremble, turn red, can’t think clearly.

Other times, we turn it inward. I’m so stupid…embarassed…run!

Either way, it’s scary and can begin a difficult swirl of emotions, actions and consequences. Who hasn’t lashed out and said something they regretted in a moment of anger?

First, recognize that anger has a place.

Anger is telling you something. It’s just hard to hear sometimes.

Second, step away from the anger.

Seriously. That rushing sound? That inability to recall details after the angry-episode? It’s because of the anger. Things become “right” or “wrong” – we lose the ability to think through a situation, our judgement is quick and harsh. We’re just not at our best. This is great when you’re fighting a panther in the jungle. Not so great when you’re dealing with a colleague or loved one.

Excuse yourself for a moment.

That situation? it’ll still be there when you calm down.

Third, ask yourself why you’re angry.

Are you angry about the surface event? Or a pattern of events? Give yourself some time to sort out your emotions.

This can be the hardest part of all. It’s easy to ignore, move on, and just get over it already.

It’s harder to come back to a person and say, “I got angry when we were talking, but I’d like to try having that conversation again.”

Fifth, don’t take yourself too seriously.

In a culture of constant self-improvement and competition, it can be hard to let go of something as powerful as our anger.

You’re going to go there. And sometimes that’s exactly the right place to be. That’s fine.

It’s where you go afterwards that matters even more.

For some more interesting reading: https://www.psychologytoday.com/articles/201501/beyond-happiness-the-upside-feeling-down